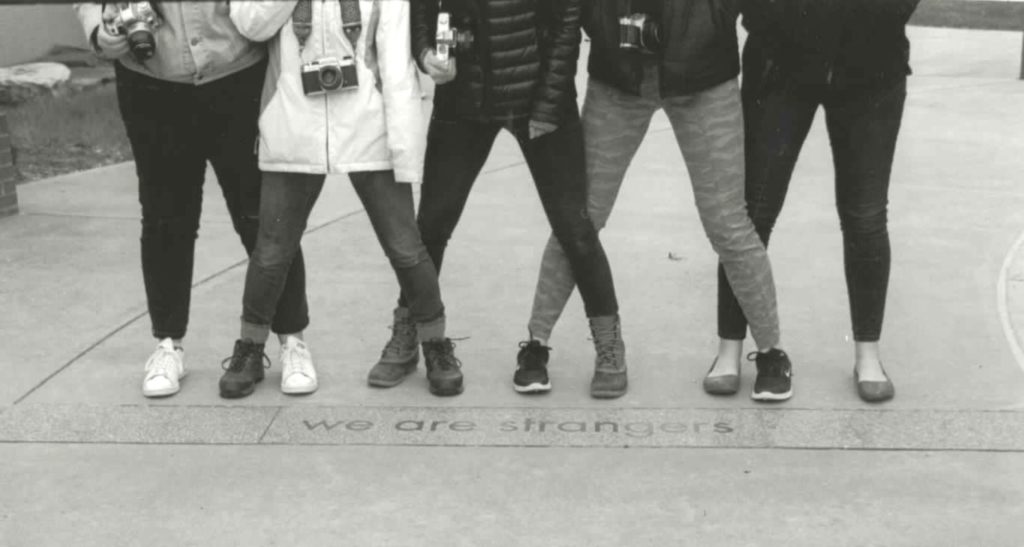 A few months ago, we at The Porch received an article from Kelly Dunn, working through his most recent battle with depression. We then reached out and asked if he would be willing to do an interview in addition to his article for our new series, Manifold Witness. This series seeks to look at different callings, careers, passions, and gifts through the lens of Colossians 1:16-17, which says, “For by Him all things were created, in heaven and on earth, visible and invisible, whether thrones or dominions or rulers or authorities–all things were created through Him and for Him. And He is before all things, and in Him all things hold together.” The title of the series is taken from the hymn Great is Thy Faithfulness.

“If there was some way I could broach the subject, or I could introduce the subject of mental illness and Christianity, I wanted to do that because I think there’s a lot of misunderstanding about it,” said Kelly Dunn in regards to the article he submitted to The Porch. Mental illness is an incredibly broad topic, but here we will mostly be discussing depression, both situational and clinical. Situational depression is primarily event related, where the person’s mood is affected by certain memories, times of year, and/or similarities to other times of depression. Clinical depression is a bit different. It is primarily caused by a chemical alteration in the brain, and can happen at any time with seemingly no reason or cause. These depressive episodes can leave a person feeling drained, unmotivated, sad, and angry, among other things.

Mental illness can be overwhelming, especially to those who feel they have no experience with it. I asked Kelly why mental health is important to God, and subsequently, why it should be important to the people of God, and he said, “This is challenging, because some people want to say, ‘Well, can’t God just fix you? Aren’t you supposed to be able to pray and be healed by the Lord?’ And the answer is I don’t know why. But I believe everything that we encounter is not an accident. I don’t believe the Lord is up in heaven, ‘Oh Kelly’s got depression, oops.’ I don’t believe that. I think God does heal people, and I believe He still cares for people with mental illness, and I believe He’s raised up doctors and medicines to help people. If He didn’t care, we wouldn’t have the available resources to help people.” Kelly acknowledged as well that, “Some Christians don’t know how to talk to people with depression. Some Christians want to say, ‘Well, just pray more. Read your Bible. What’s wrong with you?’ And then other Christians will feel fearful of upsetting you or setting you off, so they’re not helpful because they kind of want to stand away from you. But then there are other Christians, like one in particular who’s in heaven now, Ib, wonderful man. He had dealt with depression in his own life, and he was one here in church that we would drink coffee and talk.” One of the most helpful ways to care for those struggling with mental illness, depression or otherwise, is to listen, Kelly said. This means that “When someone’s talking to you, you’re not wanting to wait until they’re finished with something so you can talk. Active listening is actually listening to what the person is saying to where you have an understanding. And you don’t necessarily have to fix them.” This is a huge point of caring for those struggling with mental illness. Most of the time all of us, not just those of us with depression, are looking for someone to just listen, not someone to swoop in and fix everything. Active listening takes time, and sacrifice, but practicing it ultimately leads to stronger community.

Community was another thread throughout Kelly and I’s conversation: “One of the biggest indicators of depression is isolation, and one of the biggest helps is being with other people,” he said. “I’ve been so depressed I’ve not

Caring for one another is mostly mundane faithfulness and small things with great love. In the midst of struggle, “Community is huge. In fact that’s a good word to use. It’s huge. And that’s something people in churches need to understand, not even just for someone like me, but for each other, period. They need to be more inclusive, more embracing, more accessible to each other,” remarked Kelly. Galatians 6:2 tells us, “Bear one another’s burdens, and so fulfill the law of Christ.” Proverbs 27 says, “Better is open rebuke than hidden love. Faithful are the wounds of a friend; profuse are the kisses of an enemy…the sweetness of a friend comes from his earnest council…Iron sharpens iron, and one man sharpens another.” We see here that friendship and community are commands from Scripture, not merely suggestions, and wisdom comes from being willing to be corrected. When iron sharpens iron, there is a literal wearing away of the very essence of the thing. Discomfort in this sense is actually a gift to us as members of the body of Christ. It allows us to become more like Christ, to bear His image more fully. Community is this kind of forceful sharpening, wearing away the flaws that we might be sharpened to fight for God’s kingdom.

I then asked Kelly about righteous and unrighteous anger, as both those who struggle with mental illness and those who care for those struggling with mental illness experience anger, anger at God for allowing these things to continue, anger at sin for causing these things to happen, anger at themselves for their inadequacy in facing it, and we know from the Bible that anger is not always sinful. However, there are some things that we need to acknowledge about our anger: “I probably was angry with God for about two years. Just mad. Mad at God. Went to church, still mad at God. Didn’t ever want to talk to my wife about anything spiritual. I was just mad. Some Christians think they’re not ‘good Christians’ if they say they’re mad at God. I think it’s probably more common than we know. But you have to admit to God you’re angry with Him. And I did. And that’s when healing started coming back to me. I actually admitted to God, ‘I’m angry with You.’ Then I had a Jobian kind of experience: ‘You don’t know Me. You don’t know what I’m doing. And You have to trust Me.’”

After sharing his story and his journey, Kelly finished with, “I have to be careful because I don’t want to say God made a mistake with me. Because I could look back and go through a lot of things, like why was I born into the family I was born into, why did this happen that way, why did this happen to me, why was I this big of a fool, all these whys. The Lord wasn’t surprised by anything. At the end of all these things, God has a perfect plan for me. I don’t believe things are ever out of the control of God. He is almighty in everything, and I don’t know why things do happen or don’t happen. I don’t pretend to understand why. But God knows. And we have to trust Him.”