May 2022 | Written by Maribeth Griessel

Some people go by one name, perhaps others may answer to two or three.  But this gentleman is known by several monikers…..husband, dad, brother, PASA (pro account sales associate at Home Depot), worship leader, choir director, and of course the most important one, “Papa”!  Needless to say, if you attend, or are familiar with, the early service at Gashland, you will recognize our “Get To Know” subject for this month as the Worship Leader for the 8:30 service, Chuck Leedle.

Charles Stanley Leedle was born and raised in Springfield, Ohio, graduating from Springfield North High School….”Go, Panthers”!  His father, Robert Leedle, formerly employed in manufacturing, as well as being an avid photographer and fly fisherman, and his mother, Blanche, who was a homemaker as well as an office secretary, were parents to one other son and two daughters.  Chuck’s brother, Bob, lives in Newark, Delaware, with his wife Gloria, and is an engineer, while his wife has a successful career as a homemaker.  Sister Barb and her husband Dave, reside in Houston, Texas, where she also is a homemaker and he is an engineer….(do we see a pattern here?)  Chuck’s other sister, Pam, and her husband, Ben, are both deceased.

Following high school, Mr. Leedle attended OSU, or, as he identifies it, THE Ohio State University, where he earned Bachelor of Music Education and Master of Arts in Educational Administration degrees.  He then attended Ashland University (also in Ohio) to obtain his Principal’s Certification and Superintendent Certification.

In November, 2016, Chuck became the Worship Leader at GEPC, where he also serves as choral director.  Though his work here has kept him busy, he has a long history in church choral music, so was comfortable with his duties.  Then, after 3 ½ years in this position, the Covid monster reared its ugly head and turned the music program upside down!  Chuck has spent two years dealing with all of the worship changes required to keep everyone safe, and yet provide a meaningful worship experience for our congregation, both in person and those watching online….certainly not an easy task to accomplish.

When discussing his favorite person in the Bible, he states, “Without a doubt, King David is my very favorite character!  I have always been moved by the passion of King David, and his heart, the way he would turn to God in times of need…and also his faults.  I can certainly relate in life to the imperfection that David expressed, and yet he was a man after God’s own heart.”  Additional portions of scripture that are important to him include, “Psalm 37 is one I revisit often, and I find Romans 8 and 9 contain amazing contrasts.”

During his childhood, he attended First Baptist Church in Springfield, OH.  His family had a long association with that congregation as his grandfather helped to establish it.  While a high school student, Chuck enjoyed a particularly good history teacher, and he grew to love the subject, American history especially, and world history to a somewhat lesser extent.  He had a professor at Ohio State who “saw things in me that I was not even yet aware of when it comes to teaching children music, and she really brought to life the music teacher that I became.”

He met his wife, Debbie, at Trinity Grace Brethren Church, and they were wed there 37 years ago.  “Now that the kids are out of the house, Debbie and I enjoy weekly trips to our favorite coffee shop for quiet time together.  I look forward to that.”  These kids that he mentions are their son, Mark and daughter Clara.  Mark and his wife Brittany live in Delaware, OH, where he works as a restaurant manager/partner, while Brittany is in tax accounting.  Clara and her husband Kyle White reside in Lenexa, KS, where she is a home 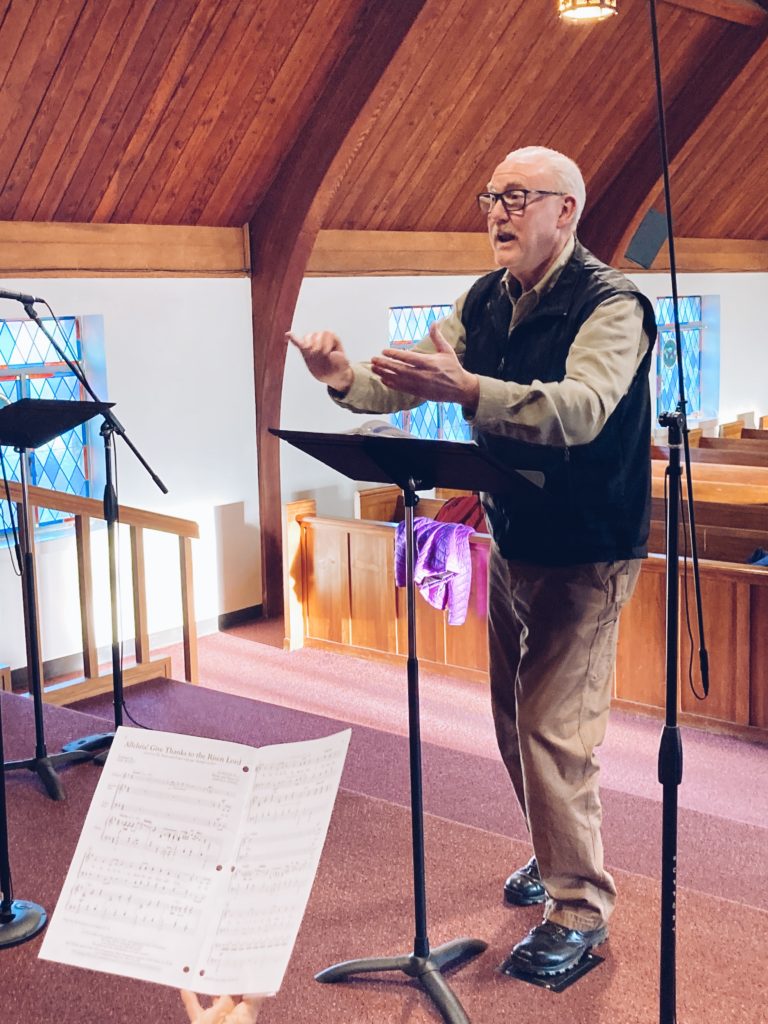 school teacher and he is a Certified Registered Nurse Anesthetist.  And Clara and Kyle have given Chuck that favorite title of “Papa” to Naomi (12), Leah (10), Josie (8) and Hannah (2).

Some of Chuck’s former positions include teaching school music in Columbus and Heath, OH; high school principal in both Pataskala, and Millersport, OH; and director of music at Eastside Grace Brethren, Pataskala Grace Brethren, both in Ohio, and Tryst Falls Baptist Church in Kearney, MO.

Being quite an outdoorsman, Chuck is an avid hiker and backpacker, as well as enjoying birdwatching and SCUBA (self-contained underwater breathing apparatus) diving.  His love of the outdoors came from his father as well as his experiences as a boy scout.  He also inherited an interest in photography from his dad, and would take slides and use them to tell stories to present shows of family vacations.  He has traveled to many interesting locales, including England, Scotland, the Caribbean islands of St. Vincent and Andros, two major cross-country road trips, and has often summered in Ocean Grove, NJ.

Chuck thoroughly enjoys reading, with two favorites being “Undaunted Courage” (the story of Lewis and Clark) and “The Rise of Theodore Roosevelt”.  He’s currently engrossed with John Piper’s “Providence”.

When mentioning his interest in SCUBA diving, he explained, “As a child I had a favorite TV show entitled ‘Sea Hunt’, starring Lloyd Bridges.”  Okay, readers, if your mother gave birth to you anytime after say the 1960’s, you probably have no clue about this show, so hit Google!.  “When ‘Sea Hunt’ came on, I would remove my shoes and pull my socks partially off of my feet and pretend that I was wearing SCUBA fins.”  Perhaps we should make sure Chuck keeps his shoes on during Sunday morning worship services?