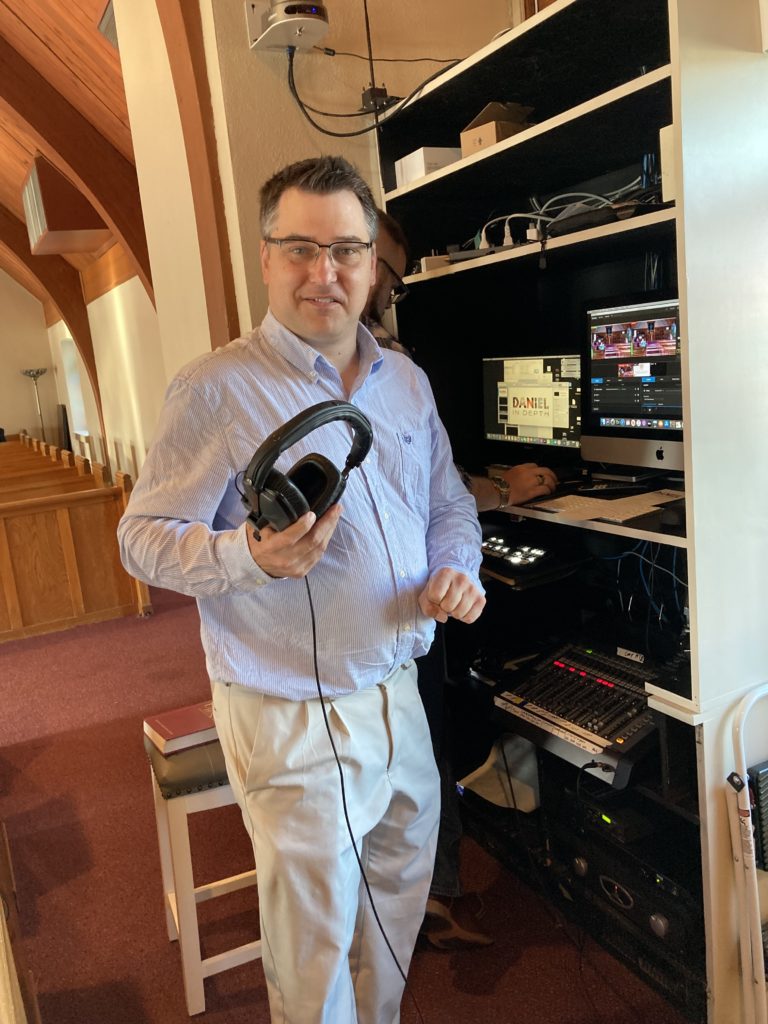 “I spent 1 ½ years in the Army, using explosives…..soon after, I spent a year in prison.”  Wow, didn’t see that coming!  Perhaps a bit of explanation is in order.  Bill Leuenberger is a career industrial engineer, with a specialty in “lean manufacturing,” and he worked, not served time, at a prison trying to improve the efficiency of their manufacturing operations.

Texas beckoned to him, offering both employment and an all important escape from the snow! For eight years Bill lived in the Austin area and enjoyed having no white slick stuff to either shovel or drive in. But work brought another move, this time to the Kansas City area. (Sorry, back to the snow belt.)

Bill and his wife, Karen, are parents to two teenagers, Eric, age 16, and Ava, age 14.  Bill has initiated a great family tradition, taking his children out to breakfast on Saturday mornings. So far, they have narrowed their favorites down to three Liberty locations, including Huey’s On the Square. The family has traveled to Nashville, and is currently in the planning stages for a trip to Tulsa.

When the Leuenbergers were seeking a church, they first united with Christ Covenant Presbyterian in their home area of Liberty. After that church closed near the end of 2012, Karen, who was interested in the reform movement, discovered Gashland. Bill was looking for a church in need of his special skills in sound equipment management, after having been “volunteered” to handle sound at a church plant they were involved with in Texas around 2003. Upon attending a few services at GEPC, he soon realized this church was definitely in need of his assistance. Both the 8:30 and 11:00 services now benefit from his expertise in this area.

Of course, as with most areas of church life, the group running and maintaining the sound systems is always in need of additional assistance. Bill encourages anyone with an interest to consider joining the team, saying, “The sound system is a lot easier than it looks…You just set it and forget it! If you can hear and see, it’s not tough!”  Well, tough or not, this sound guru certainly manages to make the church musicians “give of their best to the Master.”

In his younger years, Bill had planned to be a photo journalist. His additional interests include learning to play his newly acquired bass guitar, drawing, cooking, and in the past, martial arts. Though he has read the Sherlock Holmes books, he primarily enjoys reading self help material. Some of his TV favorites are cooking shows and public television. One of his most memorable movies is “The Shawshank Redemption.” But he is also an avid Star Wars fan, along with other SciFi.

And so, Bill is not a prisoner, nor is he currently blowing things up, but he is ensuring Gashland congregants, both in person and at home, are able to participate optimally in worship services every Sunday, which a much needed and appreciated ministry at Gashland.