Sight & Sound of the Gospel 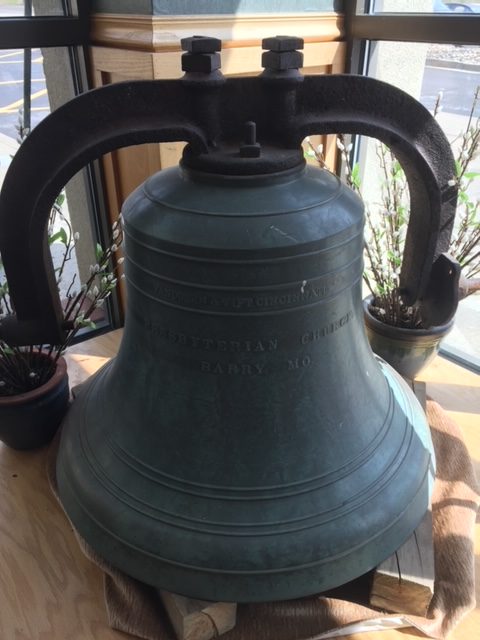 One hundred and thirty-eight years ago, two church bells were forged in Cincinnati, Ohio to ring in the town of Barry, Missouri. The small community of Barry had been a depot for westward expansion before Kansas was a state and Platte County was part of Missouri. Barry Presbyterian Church and Barry Christian Church shone the gospel light, and the bells were to add sound to the message of Christ.

Traveling as freight did in 1883, river, railroad and horse-drawn wagons brought the bells to what is now Barry Road and Platte Purchase Drive where Platte and Clay Counties meet. The Barry Christian bell is still visible at that church across from the QuikTrip. The Barry Presbyterian bell was operated atop a church building that is no longer standing. As that church and congregation were disbursed in 1931, the bell found its way to a garage, then for years it was atop the Gashland Methodist church before again being taken to a garage. In 2016 it came to Gashland Presbyterian. It has been on display in the breezeway by the Fellowship Hall kitchen until this past month.

The Gashland Community Church (later GEPC) was formed in 1945, taking up the Barry Presbyterian charter and some of the former members of it. Through the efforts of long-time members, the bell has come under GEPC supervision, with a vow to display it and to “ring the bell on certain occasions.”

Such an opportunity has presented itself in the form of a limited-term loan of the bell. The Brim, a wedding venue in Platte County developed by Aaron and Kelsie Kleinmeyer, was seeking to fill two towers with bells rung by newlyweds. This rural setting, eight miles from where the Barry Presbyterian Church stood, offers free and low-cost weddings with the theme “Marriage Matters.”  Part of the placement of the loaned Barry Presbyterian bell (The Brim purchased a second, smaller one) requires documentation to be displayed after approval by GEPC.  This display will note the historical background of it and provide credit to our church as well as Gashland Methodist.

Once the chapel is completed at The Brim, Aaron and Kelsie plan to invite the church out for a special event to hear the story of The Brim, the bell, and to hear it ring.  A date will be announced soon.

Ringing the bell on a wedding day and displaying the Christ-centered nature of this historical artifact allows the original sight-and-sound of the gospel to impact thousands of lives that would otherwise know nothing of it.