Eleos is a special ministry for Gashland EPC, and a part of that ministry involves collecting coats to distribute in the northeast part of Kansas City, near the Eleos Coffee House location.  A fairly new member of our church is involved in providing these coats to needy Kansas Citians in this area, and will soon be helping with the coat drive.  As she voiced, “Any person or organization can give someone a coat, but as Christians we give them so much more.”  Robin Bowin went on to explain the importance she finds in ministering and witnessing to this needy neighborhood, where she reports she views drug deals and prostitution running rampant with every visit.

Having been born in a medium sized mid-western town, she has lived in many locations, including our southeastern states.  Her father, Dennis, was a VietNam veteran and her mother, Kay, worked in the publishing business.  Her family moved to the Kansas City area from Nashville, TN, when her parents retired. Robin has a brother, Wesley, two years younger who is a manager for a railroad shipping contractor in the KC area. And she is proud of the exciting fact that formerly he was an electrician for country star Tim McGraw’s national and international tours.

At age 22, Robin began a career as a sales representative also in the publishing industry, traveling throughout the United States and parts of Canada selling books and other media to public libraries and schools.  As a rather young sales rep, she sometimes found it difficult to be taken seriously by her customers, who were often the age of her parents and even grandparents!   After some time in this position, her three weeks per month travel schedule began to wear on her.  She wished to marry an important young man in her life, Phil Gordon, and be, in her words, “in service to my husband rather than to a publishing company.”  And Phil offered her a very important gift….the ability to stop working and go back to school.

She attended the University of Central Missouri, in Warrensburg, with a major in environmental science. When asked to define this field, Ms. Bowin explained that she became a wetlands specialist, or basically a plant physiologist.  As an undergrad student, Robin especially enjoyed classes in limnology.  Ah, yes, if “plant physiologist” is confusing, what could “limnology” possibly be?  Glad you asked.  This is the study of lakes and waters.  And she also was fascinated by dendrology, the study of trees.

Unfortunately, this accomplished young woman developed troublesome physical symptoms which were finally diagnosed as a difficult, progressive and newly-studied incurable autoimmune disease.  “When I began to feel unwell, I thought it was from standing in hip-deep water for hours at a time or a mosquito bite or something that I picked up in the area of my work.  It kept getting worse, so I could no longer work in my field.”  So unable to continue working, Robin went back to school and earned an MBA from Park University.  Ultimately her disease was identified as mastocytosis.  As she is tested monthly for leukemia, which she states “it’s not ‘if’ I get it but ‘when’ I do”, she would greatly appreciate our prayers.  “I wholeheartedly believe God has a plan for me.  He had to make me slow down and refocus.”

After growing up in a Methodist church, she and Phil were searching for a church that was deeply rooted in the Bible.  They first came to Gashland in 2017, found truly Godly pastors and teachers, and never looked elsewhere.  Due to the delays caused by Covid, Robin and her husband didn’t actually become members here until last year.  A favorite scripture, one that she carries with her everywhere, is found in James 1:19, “My dear brothers, take note of this: Everyone should be quick to listen, slow to speak and slow to become angry.” 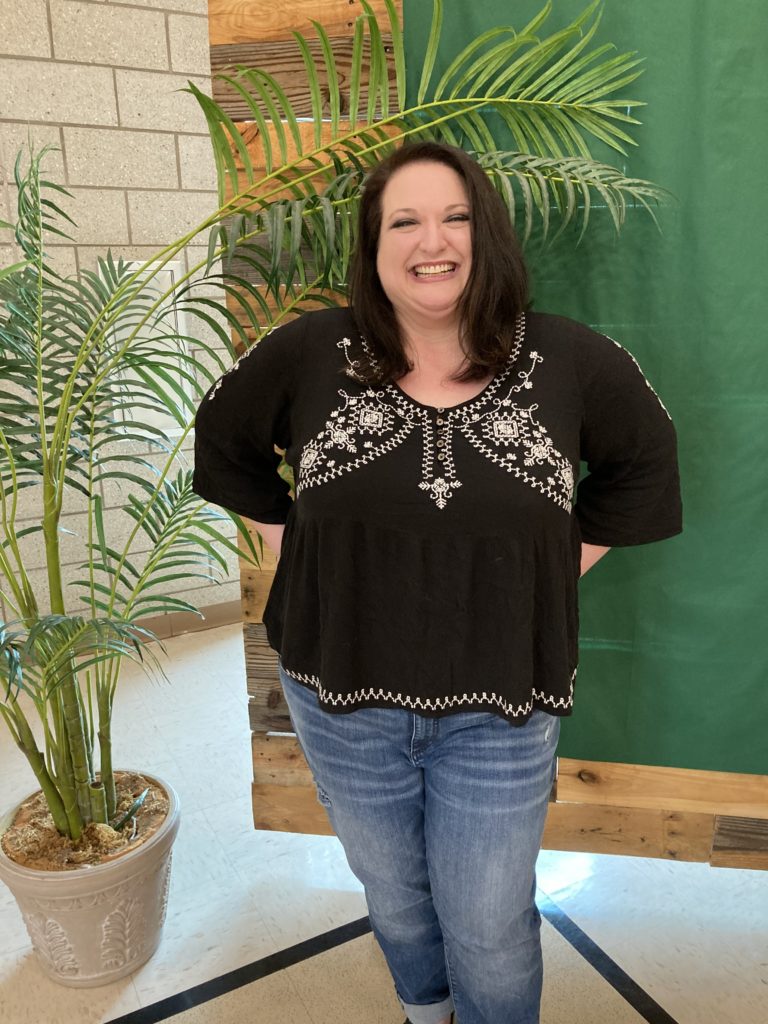 Gashland has benefitted from Robin’s strong desire to serve, “I want to be working with other Christian people, being in service.  There are so many vulnerable people in our community, and it’s important to me to be personally spreading the Good News.”  She serves on the Mercy Team and in Missions/ Outreach at GEPC, and with CASA (Court Appointed Special Advocate), working with children in difficult situations.  You may also have seen or spoken with her as she sometimes fills in as a substitute in the church office if the office administrator is off work.  She has noted that the Gashland members are deeply caring individuals, as evidenced by the many phone calls she has fielded with people calling to check on those who are listed on the prayer list.

Robin and Phil are proud “parents” to three felines, Jessie, Frank and Cole (as in the James and Younger boys.)  Though she spent a great amount of time traveling with her early job, she and her husband do enjoy visiting various locations, with a favorite being Tybee Island, outside of Savannah, GA.  Ms. Bowin is an avid reader, with her best choice being “To Kill a Mockingbird”.

This interesting lady learned some specific skills early on in a “gun-friendly” home, and is certified to be a firearms instructor and range master.  Fortunately she met her husband-to-be in 2005 while living in a loft downtown, and they married in 2010…..because one would think she learned long ago that “you can’t get a man with a gun!” Obviously Robin’s middle name is not “Annie Oakley”!