We introduce to you this month a gentleman who could qualify for our “Get To Know” columns, in which staff members, elders and deacons are commonly interviewed.  As Marion Lynn has recently completed a term serving as a deacon, he could definitely have been featured in this area.  However, he prefers service in a variety of volunteer capacities, so for the November issue of The Porch we will meet with him as a volunteer (not to say, of course, that elders and deacons are not also volunteers!)

What’s in a name?  As a retired school principal, most recently working for 19 years in education administration in an 850 student middle school in Pennsylvania, Marion certainly has a heart for kids.  He related, “My typical day would begin with prayer before even entering the building.”  One of his priorities was to learn each child’s name, so he would study pictures and names from the intermediate school, grades 5 and 6, so that when these students walked through the doors of the middle school on their first day he could recognize them and call them by name.  “It’s a biblical concept… that He knows our names, so we need to learn people’s names.  We need to be able to call them by name, no matter whether a student in school or a member at church.  One of my greatest joys is serving communion at church and calling each person by name as they receive the bread and juice.”

Born in Smithville, MO, Mr. Lynn grew up on a farm across the state line, attending Lansing (KS) High School.  He earned both an undergraduate degree and a master’s in guidance from Emporia State University, and later attended Washburn University in Topeka to add a master’s in educational administration.  In addition to his work as a middle school principal, he has taught Spanish (he met his reading teacher wife, Barb, while doing so).  His work in the field of education has included both public and Catholic prep schools, in high school as well as the younger middle school levels.  Marion’s family includes Barb, his sister, Jocelyn, who continues to live outside of Lansing, and two four-legged members, Pembroke Welsh Corgis Oliver and Winston.

By the way, should there be a tornado approaching you might want to seek out Marion Lynn.  In 2017 he became a Certified Storm Chaser, able to read and explain the “hooks” that appear on radar when such a weather monster is nearing.  But (thankfully!) he does not actively chase these rascals!

Prior to returning to the midwest from PA, the Lynns were active in Bible Study Fellowship, which was a contributing factor in their search for a church home upon their move to the Kansas City area.  They feel Barb was led by the Holy Spirit to Gashland, a host for local BSF.  Even more importantly, they sought a church where God’s Holy Word was taught and preached, and they admittedly “screened” GEPC before coming here, including listening to Ritchey’s sermons online.

Since uniting with our congregation, both Mr. and Mrs. Lynn have been active in several ministries, including choir for Barb and various areas for Marion.  This former teacher/administrator has a heart for youth and children.  “I like youth.  On Wednesday nights during Conversations I eat with the kids.  Student Ministries Director, Caleb Mason, has a lesson, then we break off into small groups and I get to be a leader with middle school and high school boys.  Our small group discussions are about what the boys got out of these scripture based studies.  One thing I’m sure Caleb doesn’t know is that, as I know what scripture he is teaching at a given time, I study and outline the text so that I can talk with the kids about what we’re studying, and more importantly about how they can apply this in their lives.  The boys are encouraged to give prayer requests and praises.  Some kids will call me (during the week) and ask for prayer.”  Marion has mentored the youth and attended SWO (Snowbird Wilderness Outfitters), as well as working each summer at Breakaway Camps.

During the summer he has volunteered in preschool through 2nd grade Sunday School, here again so he could better learn the children’s names and recognize them as they grow older. Again, what’s in a name?   He could be found on the floor with the little guys and working with them about praying.  “One kid said, ‘Whooo — I’ve never done that before?’ when I was teaching about prayer.” 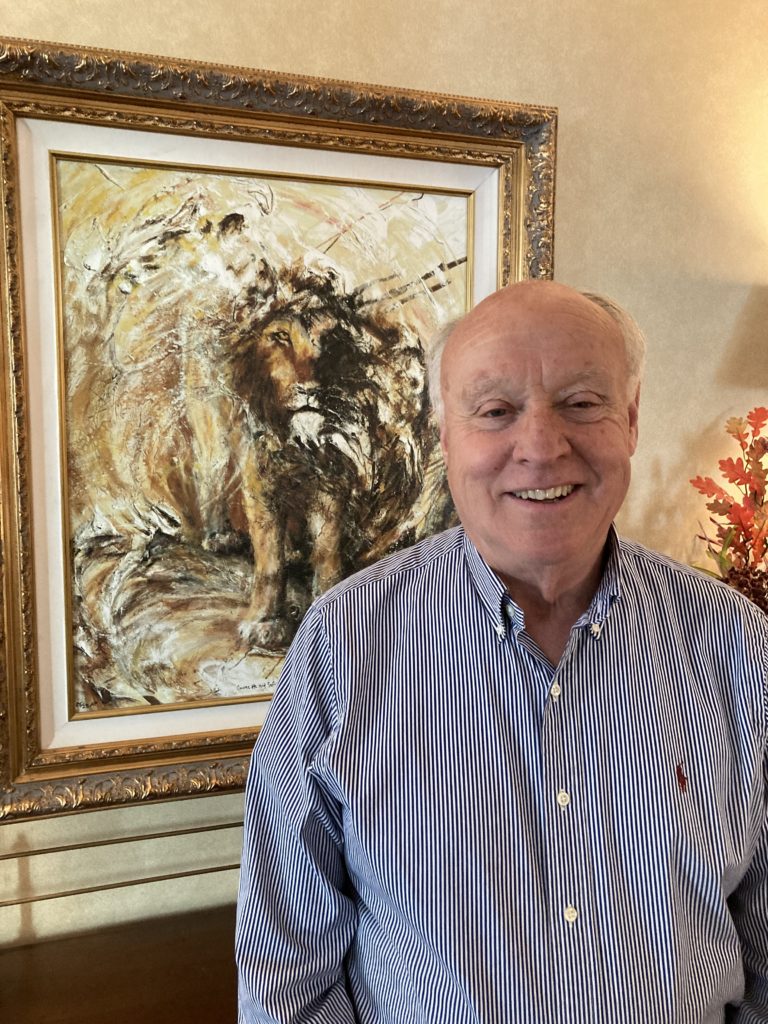 Marion related several prime ways God has worked in his life.  His godly maternal grandfather taught him to accept responsibility and develop a strong work ethic.  He lost his loving father when he was thirteen, so he learned the difficulties of boys growing up without fathers, to understand what these boys go through.  “I learned that good comes out of bad.”

Favorite scriptures include (of course) John 3:16, Philippians 4:4-7 and the fruits of the spirit in Galatians 5:22-25.  Mr. Lynn also experienced God’s working through his prostate cancer diagnosis and treatment. His faith allowed him to be “never afraid”.  The Lord allowed him to complete the final of 43 radiation treatments just before COVID hit, which put him in a better position of support to other men in the treatment program, as he, himself, had been blessed with support of some men at Gashland who had also experienced this cancer.  Marion shared, “At the end of this I didn’t ‘ring the bell’ to celebrate defeating cancer, instead I prayed by the bell, thanking God for myself and praying for others still in the program.”

Finally, he has seen so many instances of God working in other people’s lives.  There was Edwin and his wife….when Marion prayed for them she replied, “You’re the first white person who ever prayed for us.”  There was Miguel, a 16 year old father who asked for help diapering his infant, allowing Marion to use his Spanish to help and witness to this young dad.  And an amazing example of God’s working, an encounter with a battered homeless mother who moved to KC from across the state.  She approached Marion in a store parking lot and asked for $1, saying I know you’re a Christian. (How did she know that?)  She had secured an LPN job and would start in a few days.  She also had found lodging for herself and her children, but needed money for a rent deposit.  When asked why she just asked for $1, she said she didn’t want to ask for too much.  When asked how much she still needed to pay for her rental, she replied, “$17.”  Marion took his wallet from his pocket, looked inside, and found…..exactly $17.  Coincidence?  Or God?  Definitely not coincidental, according to this gentleman.

From the moment his godly grandmother bought a little white leather New Testament for him and taught him John 3:16, to the day his mom took him to VBS at a Baptist church when he was seven, to the time a door-to-door salesman sold a huge King James family Bible to his mother, to the Billy Graham crusades he watched on TV, God was working in his life. Jesus was calling him, working toward the day decades later when Marion would call Him Lord and Savior.  “I was baptized on February 7, 1988, at the age of 35.  God selected me, His Spirit guided me, and Jesus saved me.  Everyday God gives me daily opportunities to serve others for His glory.  It is a joy to share the gospel message with others (and call them by name!).  Praise God for John 3:16!”