If you have visited the Gashland church office in 2022 you are aware that the Administration Manager, Jennifer Thowe, has resigned from this much needed position. Fortunately, Jared Adams was able to fill in part time for awhile. But on February 28th a celebrity assumed an interim position as office administrator. A celebrity, you ask? Well, Kathy Welch, during her college years, appeared in a jewelry company commercial, so, yes, a bona fide celebrity!

This isn’t the first office job for Kathy. While in high school she was “Jill of all Trades”, doing cleaning, filing, office tasks, whatever needed doing, at a real estate and auction office where her mother worked as secretary. Now she is accomplishing a variety of administrative tasks for Gashland, and though this will not be a permanent position, GEPC is pleased to have her filling this important niche until an employee is hired to take over on a regular basis. Prior to Jennifer, Kathy’s sister-in-law, Emily Welch, served in this capacity, and earlier still, Kathy’s and Emily’s mother-in-law, Rhonda Welch, held this position, so it seems Gashland office administration runs in the family!

Kathy was born in Troy, Missouri, a town north of St. Louis, grew up there, and graduated from Troy Buchanan High School. Following high school, she briefly attended a community college, then transferred to Central Missouri State University in Warrensburg (where several family members had attended.)  While at CMSU she met her future husband, Landon Welch. They married prior to their last semester, graduating together, each being awarded two diplomas. You see, just months before their graduation, CMSU became UCM (the University of Central Missouri), hence the reason for their twin degrees, one each from CMSU and UCM!

The Welches are parents to two sons, Grayson, age 13, and Gabriel, age 9. Seventeen years ago Kathy and Landon enjoyed a honeymoon cruise to the Western Caribbean, and will celebrate their anniversary in August. Their family enjoys watching movies together, including sci-fi, comedy, action and thriller.  They have also traveled to such far-flung destinations as New York, New Jersey, Colorado, Canada and Philadelphia, where they lived for a month while Landon was doing training for Cerner.  Wonder who takes care of their two little morkies, Buttercup and Gizmo, when the travel bug bites them? Actually, these Maltese/Yorkshire Terriers travel with their “mom, dad, and two big brothers” on some trips.

After coming to our church in 2017, Kathy was for awhile a member of a class that was taught by former member Donna Pace.  More recently, when her son, Grayson, moved into sixth grade, she found herself filling a need for volunteers with the youth.  She now is the leader of the Wednesday night middle school girls group, and in mid March took them on a retreat.  Landon helps with the sound system on Wednesday nights during Conversations. 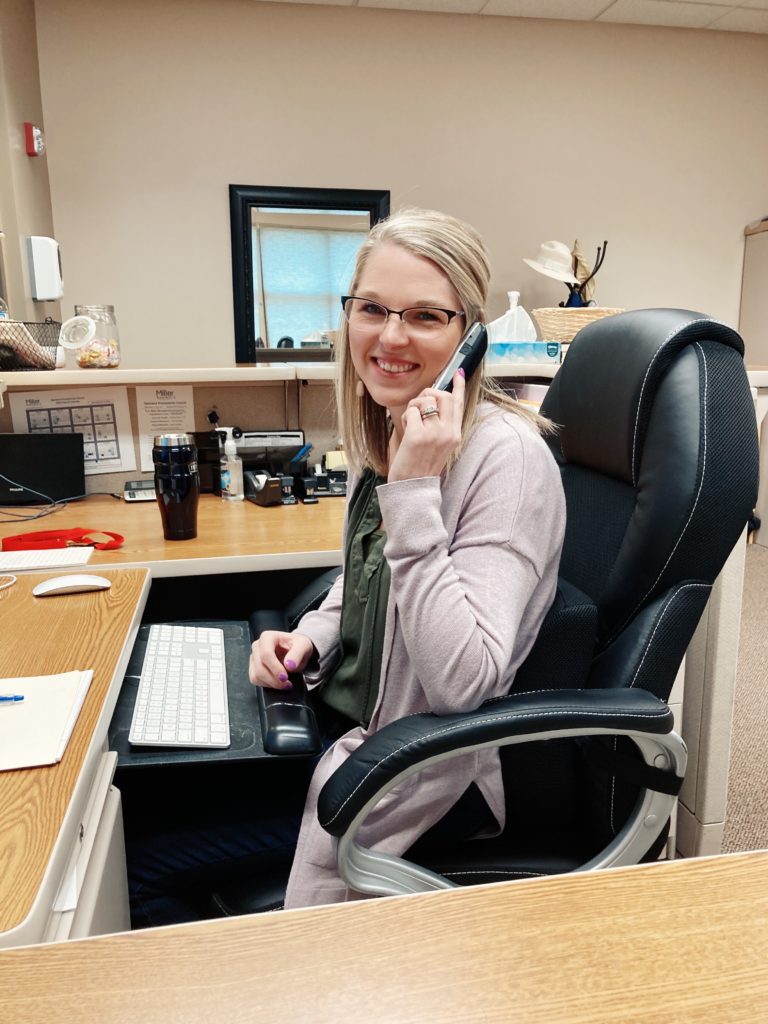 A favorite scripture verse of Mrs. Welch is found in 2 Timothy 1:7, “for God gave us a spirit not of fear but of power and love and self-control.”  She also enjoys reading all of the Book of Proverbs, “These are so encouraging to me.”  Having grown up in the Catholic Church, Kathy explains, “I began my personal walk with the Lord after meeting Landon.  I truly believed that Christ died on the cross for my sins, but didn’t have a personal relationship with Him until I knew Landon and learned that I didn’t have to go through someone else to go to the Lord.”

Meanwhile, back in Troy, Kathy’s parents still live in the same house in which she and her three older siblings grew up.  Kathy’s brother, Duane, lives in nearby O’Fallon, MO, and works in safety management.  Her sisters, Lynn, a reading specialist teacher, and Beth who works in human resources, both continue to reside in Troy.  Oh, did we fail to mention said family abode just happens to be next door to a cemetery.  While growing up Kathy, Lynn and Beth were in charge of lawn care for this adjacent graveyard!  Wonder if they worked the night shift?