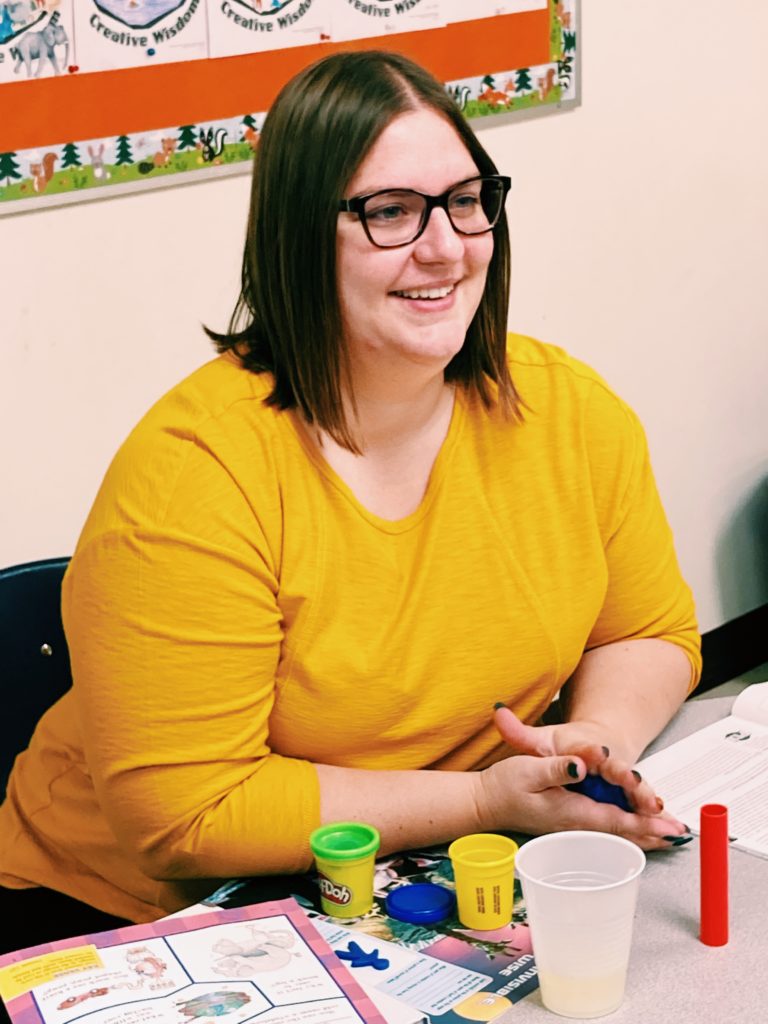 Garfield, the cat….large, lazy, a compulsive eater, manipulative, bright orange.  Also large, very large, and orange, very bright orange, is Rascal, the cat… but he happens to be lovable as well.  Thirteen years old, Rascal was even very large as a kitten when he was adopted by his human mom, who loves him dearly.  If you want to see pictures, simply ask Jennifer Wallace, lover of all things Rascal, who has a phone full of photos.

In addition to being Rascal’s person, Jennifer is well known to fourth and fifth graders at Gashland, as she is their Sunday School teacher.  She also helps with other children’s activities, including the summer Breakaway Sports Camp.  Jennifer enjoys being a member of the Community Group for 20’s and 30’s, single or married, and without children.  She has occasionally also offered her talents as a flute player at GEPC, so she manages to stay quite busy here.

She was born in Ottumwa, IA, where she lived for two years before her family moved to Grinnell, also in Iowa.  She grew up active in the Grinnell Church of the Nazarene, which her father, Harley Schull, pastored.  He has recently retired, and her mother, Deb, is also retired from her career in medical records.  Deb now stays busy working as a lunch aide at an Excelsior Springs elementary school, as well as serving as her daughter’s assistant Sunday School teacher.  Jennifer’s younger brother, Jonathan, plays bass guitar during Gashland’s second service. She and her husband, Aaron, who works in surveillance at Hollywood Casino, have been married for six years.

After completing high school at Grinnell Community High, Jennifer attended Mid America Nazarene University in Olathe, KS, graduating with a degree in elementary education.  Favorite classes included math, science, art and music, which she utilized playing flute in the band and singing in the choir.

Having previously taught 5th grade math in Hickman Mills CSD in Kansas City, MO, a job she feels is among her most challenging, Mrs. Wallace also worked at a youth center on a military base in California.  She describes this as one of her most interesting employments.  She now fills many positions at Outreach Christian, a private school encompassing all ages, from nursery care for infants, continuing through 12th grade.  She taught there for 4 years, was off for a year, and has now resumed her position.  Among her many duties, she pulls aside some of the 1st and 2nd grade children in the mornings to give them extra help with reading.  Later, she teaches art to kindergarten through 6th grade.

Jennifer began attending Gashland in August of 2012, the month after Ritchey began his ministry here.  There just may be a reason she settled here, as she is Melissa Cable’s cousin and Barbara Ryczek’s niece.  And following their retirement, her parents are also now attending GEPC, making it quite the family church.

As a lover of biblical characters, she finds herself particularly drawn to the stories of Joseph and Daniel.  She states, “Both of these characters are extremely interesting, and could each make a great mini-series if we had more details to fill in other times of their lives.”  Jennifer also favors the parables of Jesus, with her favorite being the sower and the seeds, saying “The sower is generous…we need to share the gospel with everyone, even if they’re not listening.  God was generous with us, and this is what He was explaining to us.”

Though Jennifer and Aaron are not currently able to do very much traveling, she enjoys the sounds of the ocean on beaches, as well as hiking in the mountains.  They enjoy movies, and she particularly likes all things Disney, and any light-hearted films, such as Ghostbusters.  She is an avid game player,  everything from board games, cards, role-playing, bunco and puzzles.  As you can easily note by her accompanying picture, yellow is her favorite color, matching her sunny personality!

Jennifer added that, “I have a motorcycle license, though I don’t have a cycle to ride right now,” so we must issue a warning to Caleb Mason….watch out for your bike!