“As we began to talk with members, I firmly believed that the Lord’s hand was on the campaign and we would not need to refinance the loan in 2023.” Dallas Reeve, an elder who is a part of the Debt Free in ‘23 Campaign Team, knew the clock was ticking on Gashland’s mortgage which had a balance of $354,578.99 at the start of the campaign. A balloon payment is due in August 2023, but the team hoped the campaign would allow the mortgage to be paid off prior to that.

Phil Josephson, GEPC’s Finance Chairman who is also a member of the campaign team, projects that with the pledges that have been made and the gifts already received, Gashland will be able to pay off the mortgage and avoid having to refinance the loan prior to the balloon deadline.  In fact, the loan balance had already been reduced to $99,738.52 following the gifts received on August 21. “None of this could have happened without the Lord’s blessing and guidance.”

In looking at the numbers on the campaign,  Phil said there have been 88 pledges, at all levels of giving. “The range of pledges was $10 to $50,000.” Phil also pointed out the gifts are being applied to the mortgage as soon as they come in.  “Every dollar given has gone to the bank to pay down the note every week. The total costs were a paltry $422.50. A donor has paid for those costs, allowing us to send every gifted dollar to the bank.”

“I felt as we progressed that we could meet the goal,” said team member Bill Pearce. “We could see a strong sense from the people of Gashland that there was good momentum toward being debt free. The further we progressed the more I felt we could even exceed the goal.”

Barry Cooper, who is a deacon and the team leader for the campaign, shared that sentiment.  “God gets ALL the glory for the Debt Free in ‘23 Campaign! God asks us to be available and ready to serve in whatever way we can and when we do, blessings abound.”

Barry expressed there are several reasons he wanted to be a part of this effort. “Number one was a prompting of the Holy Spirit to do whatever I can, right now, to support the spread of the Gospel in our community, the Northland and beyond. I knew through conversations with members and church leadership that a significant obstacle to achieving that mission was GEPC’s mortgage debt, so it was easy to say yes when asked to participate!”

Barry was most pleased by the way the team worked together. “It was the level of collaboration we had as the team brainstormed on the theme, graphics and messaging and that carried over to the actual execution of the campaign itself. Everyone brought their unique gifts, insights and experience together for a common goal. The team was rightly concerned with the proper timing of the campaign directly on the heels of the pandemic and during a time of high inflation, but the Lord blessed and worked through his people to achieve the goal. The body of Christ at Gashland rose up to meet the challenge and that was NO surprise to me!” 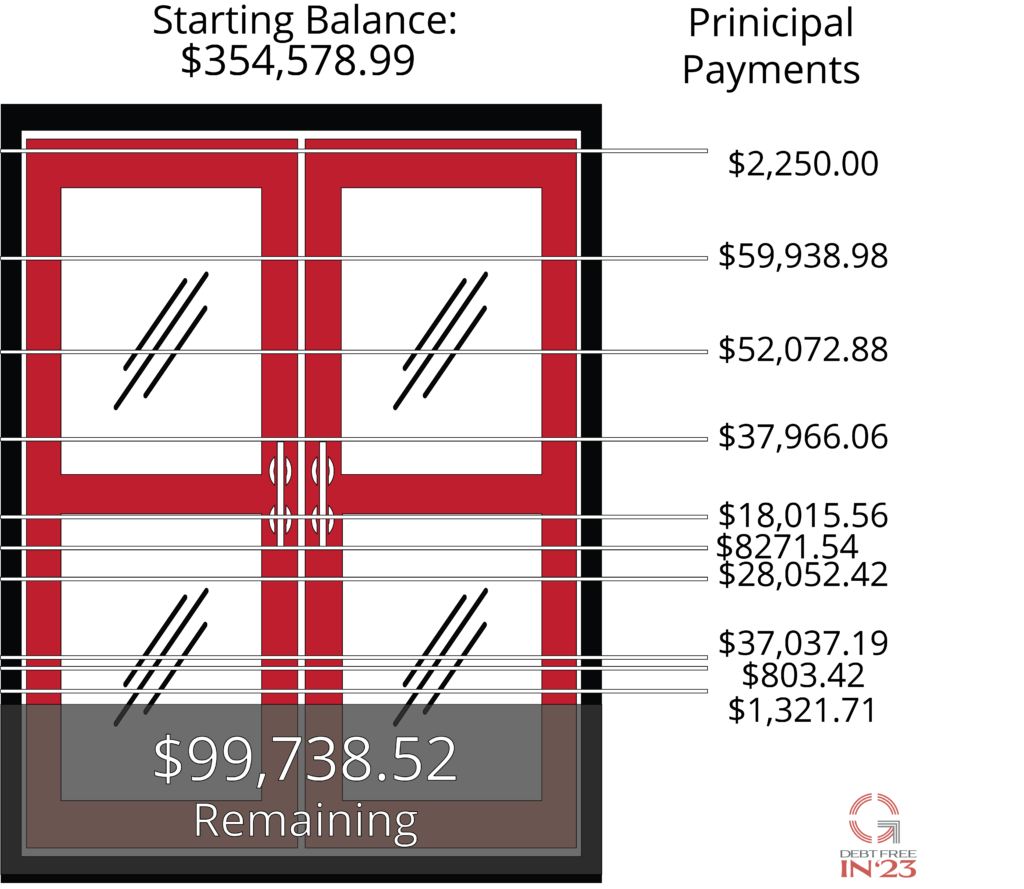 The Prayer Lead for the Debt Free team was Elder Tom Crossett.  “This was not difficult because I was already a part of a couple of other prayer groups. I invited all of those pray-ers to intercede on behalf of Gashland EPC to release us from debt. (All agreed to pray.)  Also, I knew if God was for it, He would make it happen! There was no pressure on any of us. This was/is all about God and His glory!”

Tom also shared that two of the people he had asked to pray were Susanne and Bob Drayer.  He subsequently found out that Susanne was in the hospital, in what proved to be her final days on earth.  But Tom received an email from Susanne, saying she was happy to pray for this initiative and that she thought it was a great idea.  “Bob was always with Susanne praying. They were great examples to me…. and many others.  I will miss them both but will see them soon.”

In addition to Barry, Dallas, Phil, Bill and Tom, the Debt Free in ‘23 Campaign team included Pastor Ritchey Cable; Ellie McGinty, who handled print and online communications; Jim Langford, who headed up creative and graphic design; and Barry’s wife Laura Cooper, who was in charge of messaging and communications.

Barry had a closing message to the members of Gashland. “Your overwhelming generosity and constant prayer for the campaign was truly humbling to behold. Together, there isn’t anything you can’t achieve. I mean that and I believe that sincerely.”