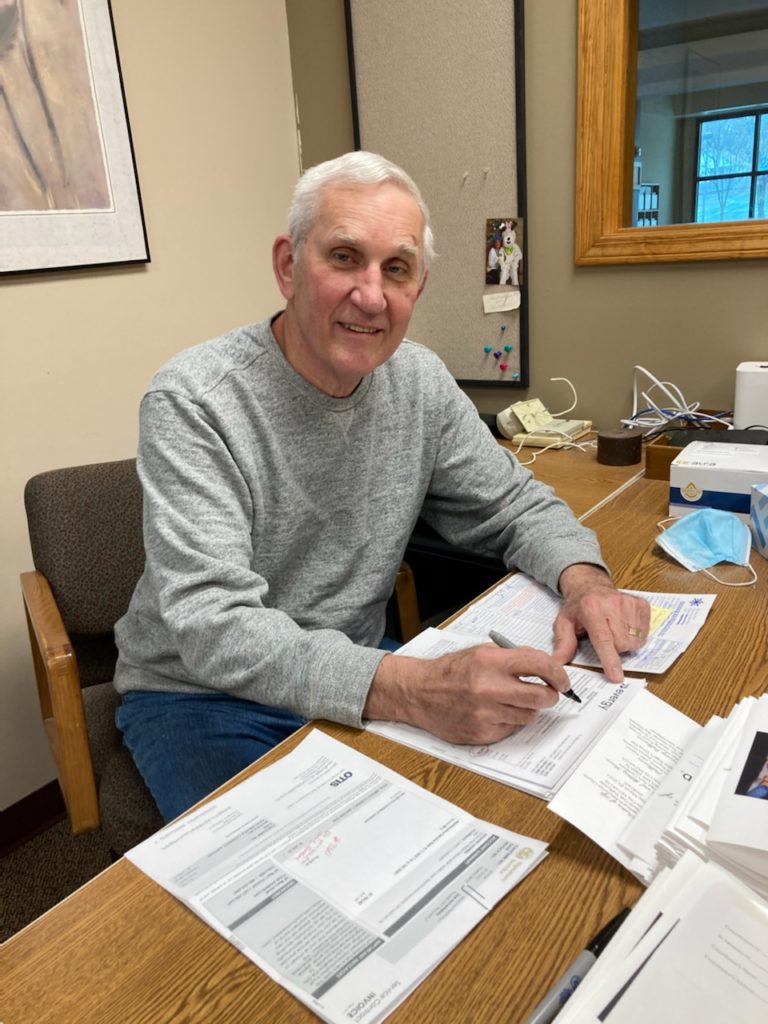 “A church is a building,” some people might say. “No, a church is a worldwide organization,” others may counter. Actually, we at Gashland would define a church as the body of Christ, and ours is characterized clearly by the many members who actively volunteer in areas of their particular expertise. As such, our congregation is blessed to have individuals such as Charlie Deis, who willingly shares his lifetime experience in accounting to assist in maintaining the financial affairs of GEPC.

After spending the first six years of his life in Kansas City, KS, Charlie moved with his family to the Missouri side of the state line, and north of the river. The Deis family initially attended a small Presbyterian group identifying as Northminister….so small they did not yet have a building. After a year or two the Deis family visited Gashland Presbyterian and began attending regularly. Though he did not “join” the church (as his parents did) at that point, he remained an active attender through his years of school, graduating from North Kansas City High School, and then the University of Missouri.

Charlie graduated from MU with a Bachelor of Science in Business Administration, and an emphasis in accounting. Following his university years, he joined the Army for two years, serving in Viet Nam for 13 months after training at Ft. Leonard Wood and Ft. Sill.

Upon returning to Kansas City, Mr. Deis began his career in accounting, primarily within agribusiness companies. He soon met and married his wife, Suzanne, and God blessed them with two children, Jennifer and Jeff. The greatest tragedy of his life struck when Suzanne was diagnosed with and later succumbed to leukemia at the age of 33, leaving this young man a single father to his eleven year old daughter and seven year old son.  The family survived, blessed by the assistance of Charlie’s parents.

About three years later this widowed Dad accompanied son Jeff and his class from Oakhill Day School on a field trip to Jefferson City. During the train trip to and from the capital, Charlie had time to become better acquainted with one of the teachers from his children’s school, Ganne (short for Georganne), mother to a little girl named Emily. 34 years ago God blessed these two single parents, merging their families. They now enjoy five grandchildren, three living nearby. Daughter Jennifer lives in Overland Park, KS, Jeff resides in Parkville, and Emily in Colorado Springs, CO. A 14 year old Puggle (pug/beagle) named Sadie completes the Deis household.

During his career Charlie worked for several agribusiness companies, always wanting to remain close to family in Kansas City. He believes his most enjoyable position was with Bartlett and Company, from which he retired as treasurer.

“John 3:16 is the essence of why we come to church,” Mr. Deis stated, giving this as a favorite scripture.  And “Psalm 37 tells us not to worry because He’s in charge, even though evil people seem to be,” Charlie believes. “God tells us to be patient.  He’s there, He’s there for us, and His will is to be done on His time table, not ours.”

Never actually having joined Gashland Presbyterian, Charlie became an Episcopalian when he married Suzanne. Ganne also was an Episcopalian. After a time, they were considering changing to another church when Charlie’s father passed away. During funeral preparations and the service, the Deis’s became acquainted with Gashland’s new pastor, Ritchey Cable in 2013. Charlie and Ganne were drawn to GEPC, coming full circle from his childhood attendance here.

Growing up a camping/fishing aficionado, Charlie, his son, Jeff, and his brother, Greg, continue to enjoy fishing trips to their favorite location, Bennett Springs State Park, where the trout await.