Down through the ages some names have become so intrinsically entwined it’s hard to think of one without the other…Adam and Eve, Lucy and Ricky, Mickey and Minnie, Romeo and Juliet.  At Gashland we also have names we link together, couples who serve faithfully together.  In Ecclesiastes 4:12 we read that a “cord of three strands is not quickly broken.”  When a husband and wife build their marriage with the Lord at the center, they become that cord of three strands.

To begin the new year, The Porch would like to feature a couple who work together so very well, serving God in ways large and small.  Bob and Suzanne Drayer celebrated their 40th anniversary this past September.  First, a bit of background information about each of them, individually….

Bob was born in Callao, MO, a small town near Macon. Along with an older sister and a younger brother, his family moved to Kansas City when he was in third grade.  Following his high school graduation, he worked for an insurance company for a year, running a printing machine.  Next, he enlisted in the U.S. Air Force, serving for three years and ten months.  Two years were spent in Japan, with most of the remainder of his military time in San Antonio, TX.

Upon leaving the military, Bob returned to Kansas City, where he began an amazing 53 year career working for the Post Office.  This time, added to his Air Force service, gave him an impressive 57 years in government service!  Bob has a son, Jeff, who lives in the Seattle area and is retired from Boeing.  He now works at a local winery part time.  Additionally, Bob’s daughter Cheryl is a retired office manager, living in northern Virginia.

Bob’s bride, Suzanne, hails from Arlington, a northeastern Iowa town, where she grew up on a farm.  The oldest of five girls, she enjoyed being a “farm kid” in a family that also included six brothers.  She and her siblings did all things, inside and outside, including driving a tractor, baling hay, whatever needed doing.  Being the oldest girl, and one who loved cooking, her mother was only too glad to share meal preparation duties with her. When Suzanne found a new recipe, her mom would happily buy the ingredients and encourage her to try out new dishes.  A graduate of Starmont High School, she then continued on to Iowa State University in Ames, where she majored in Ag Journalism.

Utilizing her degree, she moved to Kansas City to begin a career with Farmland Industries.  She started out in Public Relations and meeting planning, doing presentations, speeches, etc.  She later moved on to conference planning, which she loved as she was given the opportunity to work with many people, including managers and farmers.  Though the work could be stressful at times, she found it interesting and fun.

Fast forward to a time over forty years ago.  “I always say the Pope brought Bob and me together.  My Mom sent me these articles, a packet of information, telling me the Pope had been in Des Moines.  One day I had a postage due and I put the 3 cents back in the envelope and kept waiting for my letter to be delivered.  After three days I went to the post office to see why it had not been delivered.  When I went home I realized that the postman had left my letter along with the envelope for postage due!  A few days later he stopped by, and that’s how we met!”  Needless to say, the postman was none other than Bob Drayer and they were soon enjoying a “match made in US postal heaven.”

In addition to Bob’s son and daughter named above, he and Suzanne have one daughter, Rebecca, who lives in Independence.  And they enjoy five grandsons, ranging in age from 30 down to 7.

The Drayers have been active members of Gashland since 1997, where Suzanne has served on the Mercy Team since Ritchey came.  As mentioned above, so often a couple will share volunteer work within the church, and these two have certainly done so.

Shared activities include coordinating rides for people who need transportation to doctor or dental appointments, grocery shopping, errands, etc. They currently help clean up following Wednesday night activities, and previously helped cook for mid-week meals.  A former deacon, Bob is a “dish-washer extraordinaire”, always glad to help when needed, and Suzanne, a former elder, hosts a table for the annual women’s Christmas tea, assists with “Getting To Know Gashland” classes and provides meals for those needing help.  They also have a history of visiting countless people in their homes or in care centers. 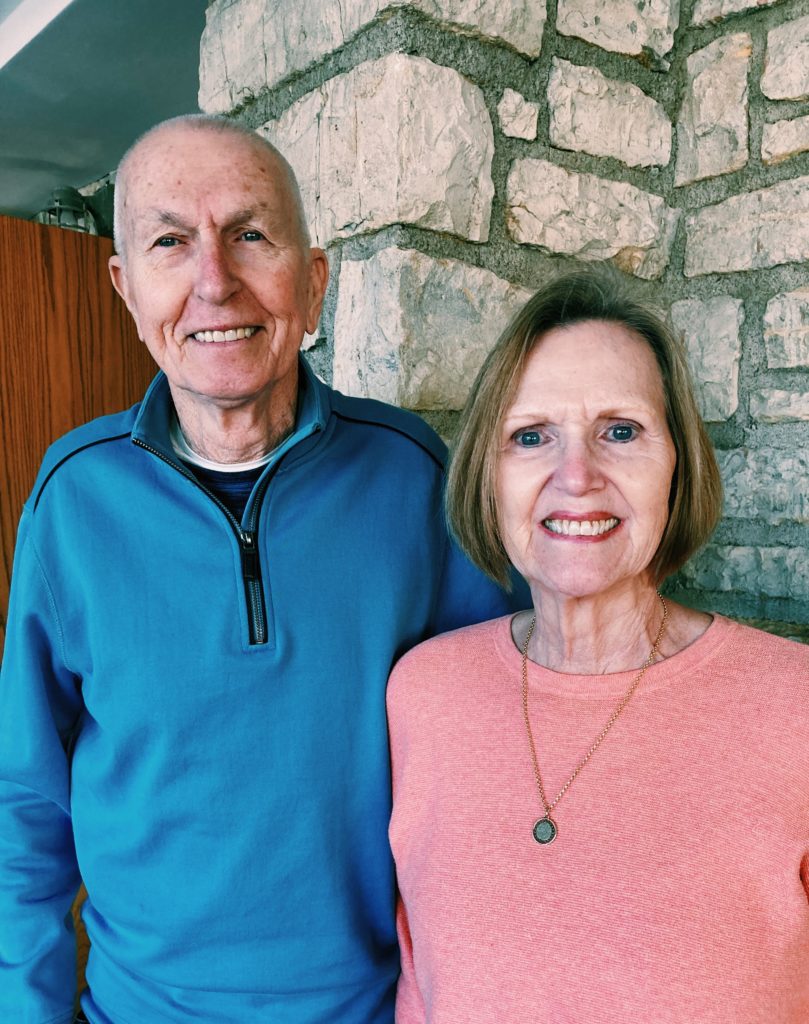 “The Kingdom of God is right relationships,” added Bob, “It’s all about relationships, whether with people I worked with, people at church or along my postal route.”  Far exceeding his job description, Bob made a habit of helping “his people”, praying for them, checking up on them and doing extra things for them….and all the while remaining on schedule!

When working with a friend on studying the attributes of God, Suzanne found a verse for each letter of the alphabet describing God.  Her “Q” word was quiet, as related in a favorite verse, Zephaniah 3:17, “….He will quiet you with His love, He will rejoice over you with singing.”  She clarifies, “It’s a verse for when I can’t sleep at night, it comforts me.  And I write it for new mothers and their children.”

While this issue of The Porch could easily be filled with an expanded article on Mr. and Mrs. Drayer, we leave it to you, readers, to seek them out and ask more about their amazingly interesting lives together!  Ask about their travels to Ireland, American national parks, road trips in Colorado, Florida, Arizona….and more.  Ask about their gardening, entertaining, reading, hiking, and above all, their shared love of the Lord!